Its a funny thing fate, one minute you’re just going about your business and the next you’re helping the UK’s most popular motoring TV program in their largest feature they’d ever done. 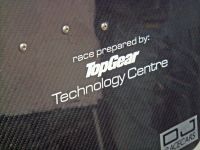 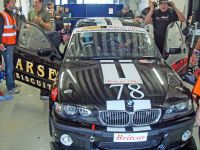 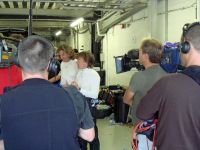 I was just picking up some more Bluefin units from Superchips and was happily chatting to Jamie and I spy in the corner of the car park a black BMW 330d race car. I’m always interested in race BMW’s so I wonder up to be intercepted by a guy enquiring whether he could help me in any way (in other words it was a p*ss off this isn’t anything to do with you type moment). Knowing that some people can be quite precious about their race cars I thought nothing of it, complimented him on the car and went back to talking to Jamie. A short while later I’m watchig the same car go onto Superchips dyno and they’re having problems, the thing wont rev beyond 3000rpm and they’re stuck, so I wonder over have a quick peak in the engine bay and interior and quitely mutter “ah, thats the problem” At this point the same guy who politely told me to mind my own comes running over saying “what, whats wrong, what is it?” Turns out this is Top Gears BMW 330d, the gentlement in question is a Grant, one of the shows producers and the day is Thursday – one day before the Britcar 24 hour weekend! 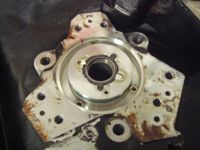 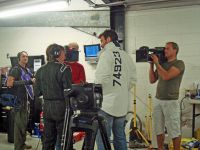 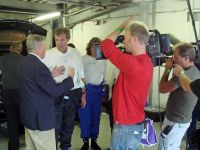 The problems were two fold really, firstly in an attempt to remove the cars ABS the entire unit had been removed and isolated and secondly when the cage was installed the cars wiring loom had melted in the process so the cars ECU was basically having a fit the moment the wheels turned, in short the car wasn’t going anywhere let alone racing. Grant asked if we could help so what could I say, we had a full workshop but a couple of calls to customers asking if we could postpone their cars (both were M3 owners and both watched Top Gear so they both agreed) and we quickly got to work. The Top Gear Technical Centre (Steve) had prepped the car but BMW control systems are clever little things and the moment you remove somehting like the ABS unit (which acts as a sensor hub for the canbus enabled system) the car will simply not operate normally. Never having prepared a BMW before they didn’t know this (understandably) so Grant quickly dashed back to Banbury to pick up what bits he could that were removed from the car and we all met at Silverstone to see what could be done. 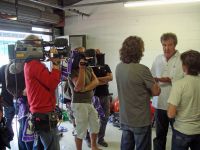 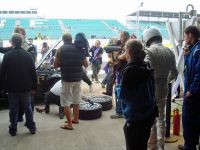 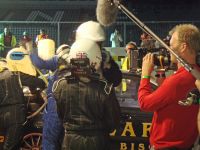 We’re used to racing and we’re used to seeing the plethora of people that any good team needs to operate but rolling up at the Top Gear garage on Thursday night was an eye opener – I’d never seen so many people, there were camera crews, sound crews, producers, directors, the Tech Centre crew and any number of people all milling about doing something or other important, just getting to the car was hard enough. Grant met us there carrying a box of bits (literally) so we set about helping Steve refit the ABS and repair all the wiring loom that had melted when the cage was installed. By about 10pm (and after spanking the car round the outer paddock making sure it was ok) all was sorted and we went home. 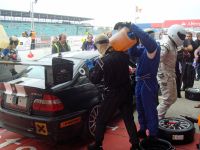 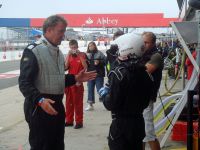 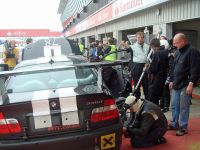 Friday was free practice and Top Gear were using it to get camera angles sorted, crew position and testing the in board cameras (there were 4 our the things inside and outside all with separate tape decks – looked like a MoS DJ bay inside) and all was fine so we hung around looking important with relatively little to do, car came in, we checked it out and then it went out again – pretty impressive really. James, Jeremy and Richard were all great fun, but I was surprised at how little actual track time they’d all had….and their first race was the 24hour – eep! What I found most interesting were their comments on the car, especially handling and brakes; all these guys are used to driving around in £100k supercars, Jeremy rolled up in a Murcialago Spyder for example but they were all blown away by the grip the BMW offered and the sheer braking power. The car was set up with AP Racing calipers and disks in a pretty similar set up that we offer on road BMW’s and running on Gaz suspension, which wouldn’t be my first choice but it was a race kit not road and each of them came back literaly amazed at how the car stopped and went round corners. As everything was going well we decided to head back to Milton Keynes to get some more bits and we got the call – the car was back in with a knackered clutch, flywheel and they think the turbo had let go as well. Steve and his team knew what they were doing and set about replacing everything and we rolled up Saturday morning in anticipation of just making sure everything was ok electronically. First fire up and the garage filled with smoke (what you see on TV was light compared to the worst it got!) so we had a major problem. After a bit of diagnostic work we concluded the fuel pump was dead and then the panic set in. To replace a fuel pump on a 330 is a bit of a mission, lots of bits need to come off and specialist tools are needed in the removal, whilst BMW had supplied numerous spares (and two technicians) we didn’t have the tools needed so off went a BBC helper to pick up the tools and we set about stripping the engine . The TV coverage doesn’t give it justice, it really was right down to the wire with the car literally only getting down the pitlane in time for the start with seconds to spare. Not making it would’ve been a massive financial failure, Top Gear had 16 camera crews (they can’t shoot for more than 8 hour sessions so needed to be rotated with 4 crews shooting at any one time) and if we didn’t get the car in the race the consequences would’ve been pretty unpleasant for all of them. We were delighted. 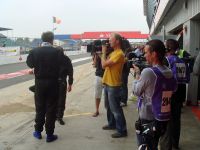 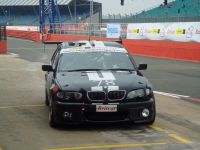 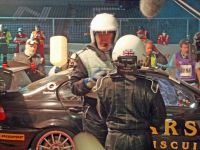 The next 24 hours are pretty much a blur, periods of boredom as the drivers lap the circuit then periods of activity as we change drivers, fuel, tyres etc and I’m left feeling impressed that this £11k 330d is doing so well. Yes, it was a bit touch and go at the start but it was lapping well with three drivers who’d never raced before and give all the drivers their credit, they’d never raced before, were out in one of the toughest races imagineable and were all taking it seriously and lapping with reasonable times. For the record, Jeremy was fastest with Richard and James almost identical – these guys can drive. Then of course there was the Stig, yes we know who he is and no we won’t be telling anyone and I couldn’t help feel sorry for the guy, he has to sit there, not say a word to anyone, all seemed pretty lonely in front of the cameras for him. Stig was always going to be the savour in terms of driving and he pulled 2 very long stints in the car where his laptimes barely moved by a tenth of a second – seriously impressive driving. We did have a laugh though, Stig was sitting in the car waiting for things to be done before he went out and because he can’t remove his helmet he could’t eat anything so Grant and I decided to feed him whatever we could find; watching the Stig generate a larger and larger pile of crisp fragments in his lap as he tried to eat some chicken Golden Wonder had us (if not him) in stitches. 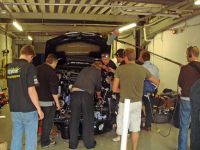 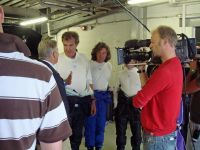 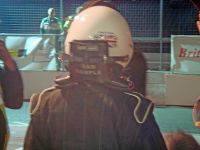 The crash was quite interesting. Richard already has the reputation in the crew as being the crasher and when he reported back that the car was dead we feared the worst but when it rolled up it didn’t look too bad, it took a while to fix and the Mosler certainly did a good job of slicing through the side but we were determined to get the car back out there. 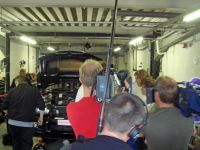 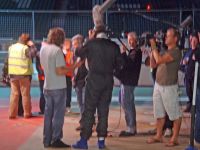 The final hours were the stressful ones, the car was slowly losing power again we thought down to the fuel pump but if it died then there was nothing we could do about it so we all just watched with our fingers crossed so we were all delighted that we finished. 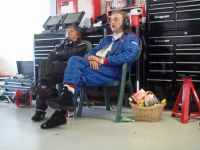 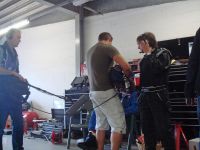 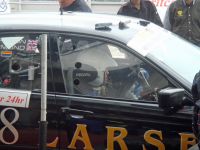 All in all it was great fun, I came away impressed at the cameraderie the whole Top Gear crew shared, normally with racing there is the occsaional terse word exchanged but all I experienced was a happy, committed team all with a common aim. Jeremy and Andy (the shows producer) certainly run the show but everything was done with a sense of humour and an attitude that a lot of proper race teams could learn from. The presenters were great fun and not a sign of the ‘do you know who I am’ type attitude that some ‘famous’ people exude and they clearly all get along very well. They all drove well (but I think will admit that it was a bit of a baptism of fire) and the Stig was both impressive on track and professional off it. Personally I was delighted that Thorney Motorsport could help, certainly without us I doubt the car would’ve made the grid but a lot of that was down to us being in the right place at the right time. Steve and the Tech Centre crew were excellent and again demonstrated a professionalism in the pits that many a larger team would be proud of. 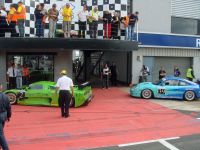 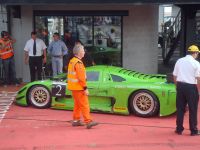 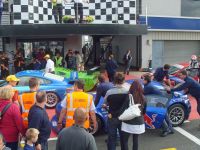 You never know you may see the Top Gear team back out racing again……I’d rather get them in an M3 or a VXR though! 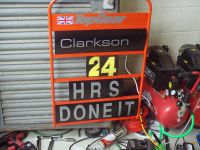