One of the best aspects of the British Cross Country Championship (and the idea of Safari Rallying) is that each track is different, some are more rally type stages and some are more full offroad and the whole series is based on the idea that you need to be competitive on all types. Round 1 at Pikes Peak was a typical rally stage with sections of more offroad but overall a good 60% was type 1 gravel surface which doesn’t really suit the Wildcat, over much of the track we were literally flat out so whilst we did well we knew that the rougher the tracks get the faster we will be. So when we arrived at Radnor to hear that the track was a lot more offroad we were keen to get going. 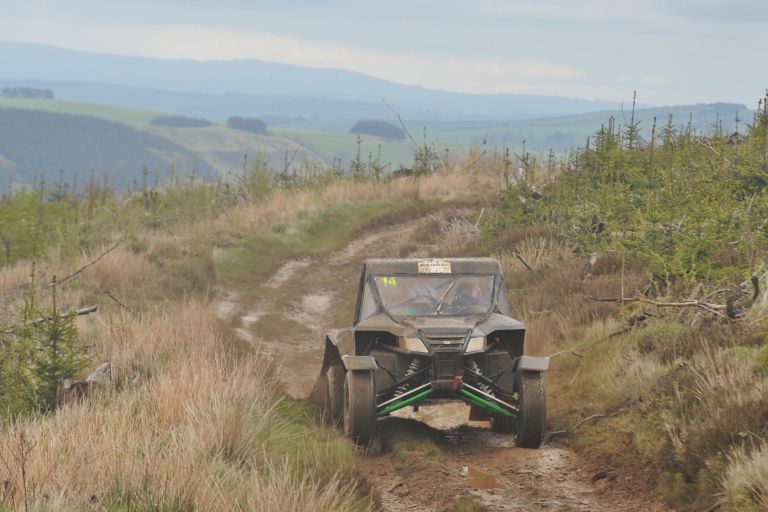 Whoops section was fun
Well, the sighting lap confirmed the comments, it was very very offroad, much of the track was deep ruts, lots of deep water with short sections of gravel track – we were delighted as knew that that this sort of terrain suited the Wildcat with lots of suspension travel and low weight our relative lack of power compared with the others would matter less in overall times.

We got a good start, nice run through the first steep section that had the Freelanders beached and struggling to get up, the whoop section at the top of the course was punishing physically but we were quick and we knew it – sometimes you just feel fast and we were feeling good, but, then came the back section with lots of water – there we came unstuck.

Bottom line? Our windscreen wiper system was not up to the job of repeated underwater sections where we would be swamped by thick muddy water in quick succession, we’d hit one deep puddle and didn’t recover any vision for 20 seconds effectively driving blind, then when it cleared we’d get hit again – there was no respite and we effectively drove blind for nearly a mile! Right at the end of the course we even managed to drive up a tree leaving me near vertical right within sight of the finish line, only way I knew was I saw light ahead of me rather than brown! 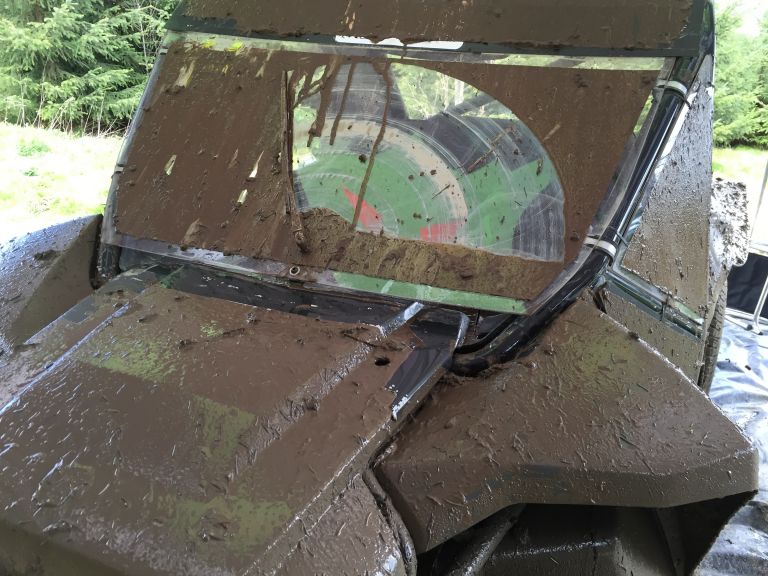 It really was that muddy
Back in service we decided what to do, with no larger wipers or stronger motor as spares the only choice was to ditch the windscreen and run goggles instead, it would mean I was going to get very wet and very muddy but that was preferable to driving an off road race car at 50mph blind. Sadly we only got a nominal time for the run, another car got stuck earlier so we had to follow others back on part of the run so our time was effectively void. 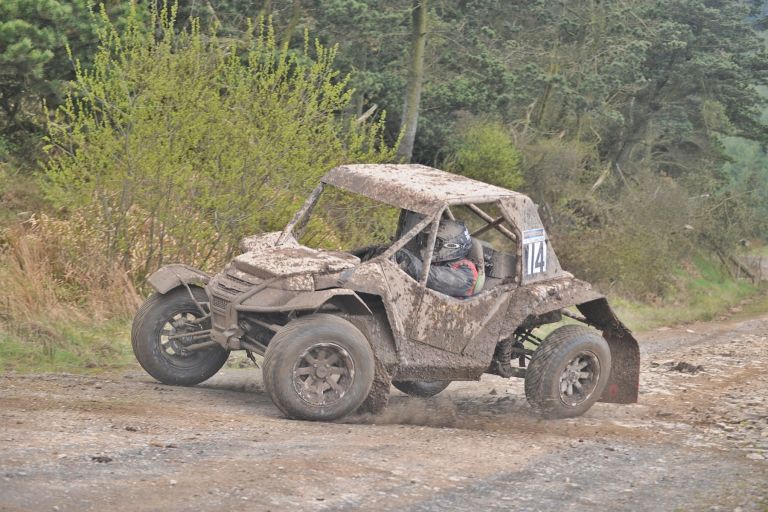 First steep sections were again great, quick and I could see, but all that vision clearly went to my head and attacking one section I hit a rock and  I punctured the right rear tyre which hampered us pretty badly, we still managed to go quicker on three tyres than when I was blind so we were still pretty happy. The heavy wet sections still made the course hard work though, even with goggles after each water hit you’d be blind for a few seconds such was the sheer amount of water – it would be over the roof on each hit. 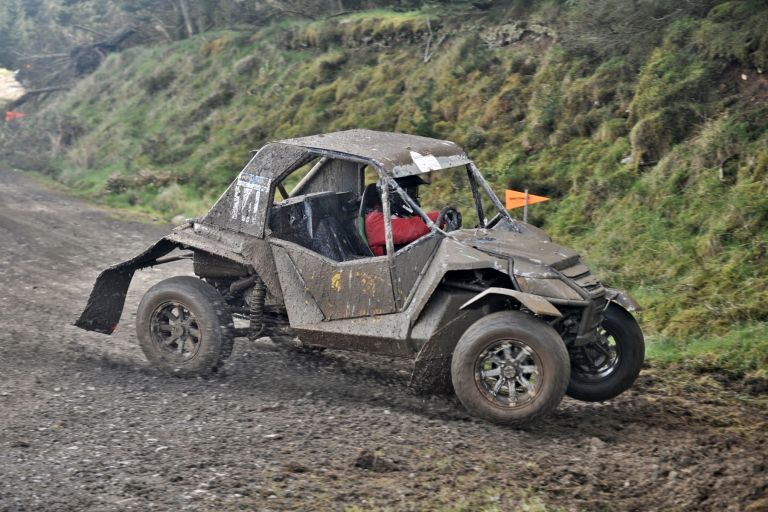 entering more off road section
So two runs done, one a nominal time and one compromised with a puncture, not the best start to a potentially good weekend but we were still upbeat, car was holding up and we were getting faster.

Finally a run that went well, fast up the steep sections, flat out through the very rough whoop sections and even some of the water had turned into mud which meant it didnt go over our roof each time meant we posted a time over 40 seconds faster than our previous two runs, we were running 8th but running a time that could have out us into 5th overall – not bad for a 90bhp car. 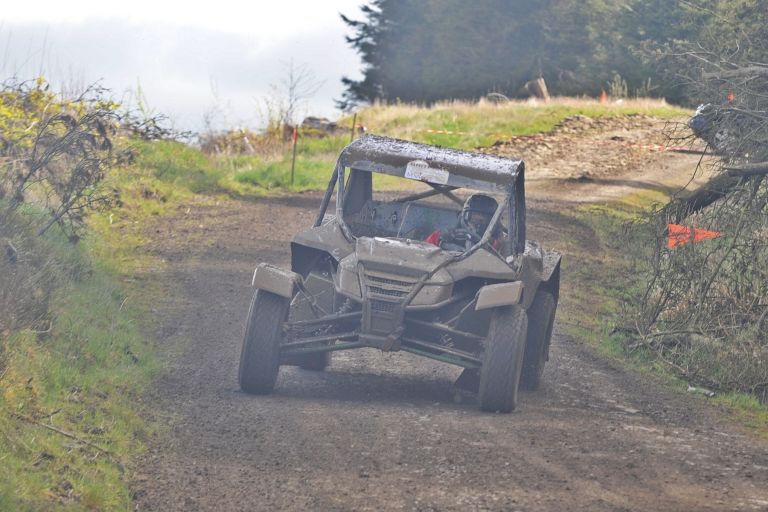 Flat to the floor
I still came back looking like some kind of mud wrestler but the car was running well, we’d changed a track rod end as a precaution after the hit that punctured the right rear tyre but we were behind on runs due to the issues so we lined up for run 4 full of anticipation.

Sadly it seemed the course was too rough for the Freelanders, some were getting beached and there were some safety concerns so after a delay the organisers were forced to change the course and cut out the steep early section – the same one we flew up. This was a blow, however we are new to the championship and we recognise that the course must be safe for all so it is what it is and we re-lined up for our 4th run not really knowing how it would affect it.

Well, we didnt really get to find out, just as we cleared onto the first gravel section the left rear wheel sheered off and we slid to a halt minus a wheel. Stage over. 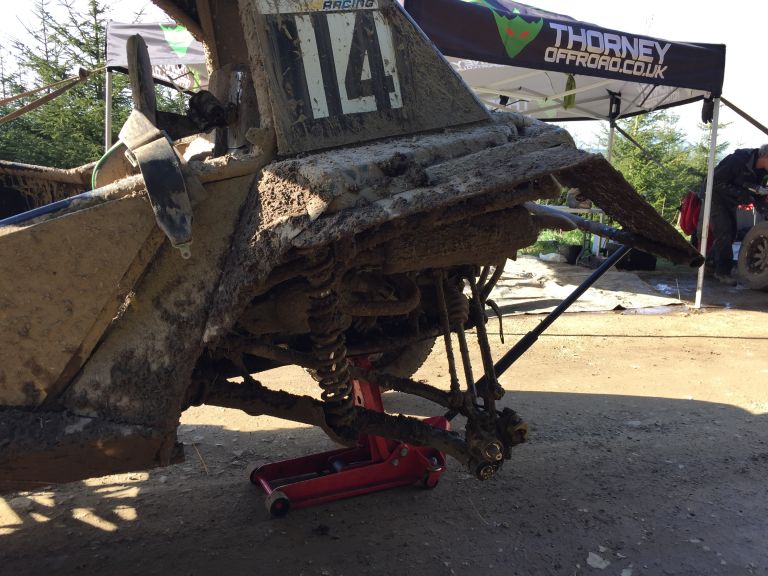 Missing something
Back in service (after a fair old hike back – thanks for the lifts from the marshalls!) the news was not good, the hub plate had sheered from the hub bolt and stripped the brake caliper and all the mounting points to the hub. We had spares of everything except the hub plate, it really wasnt something we thought we could break but clearly we could and sadly it meant that was it – hometime. 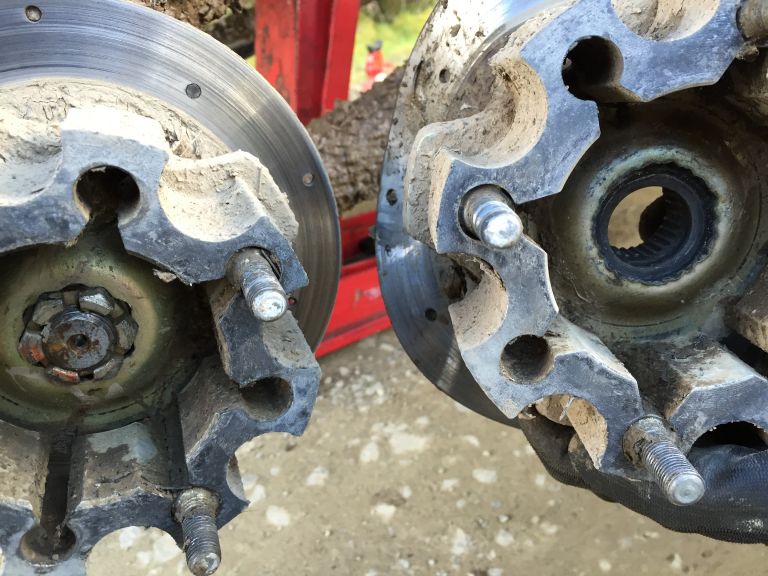 On the left, how it should look, on the right what we did to it
Overall we were a bit gutted, after some early bad luck we were running well and looking potentially at a podium which would’ve been a massive result for us considering our relative lack of power but it was not to be. The good news was that the rougher it was the quicker (relatively) we were and that bodes well for the rest of the season and in the future but for the moment we will have to look at this round as a lost opportunity. 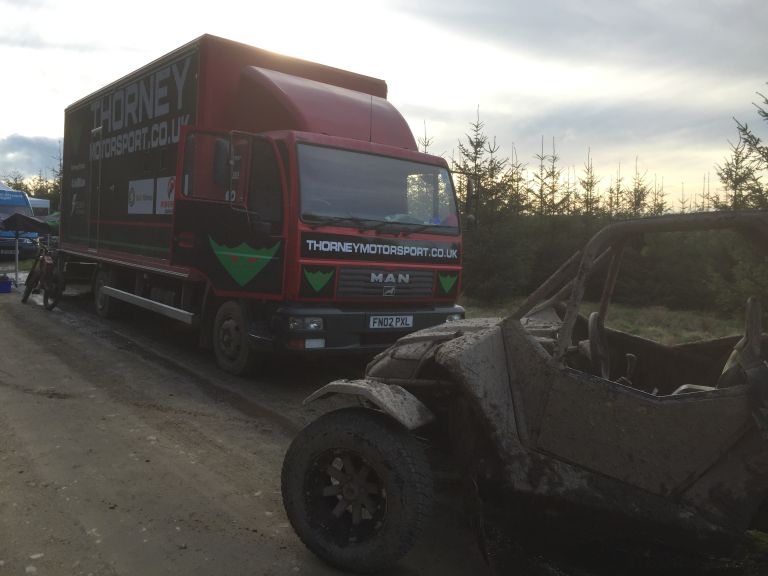 Early home time sadly
As ever though the BCCC continues to be a happy, friendly place to race and we’ve nothing but positive thoughts about the series and our fellow competitors so we are more than looking forward to the next round. 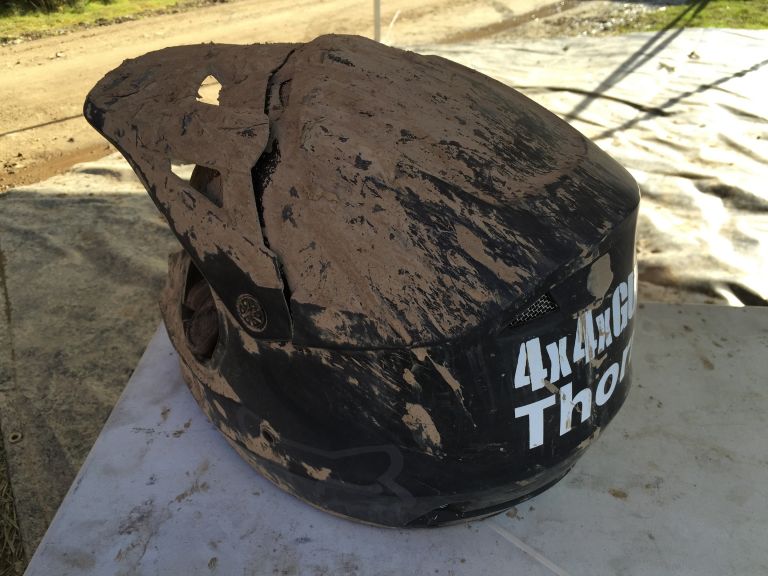