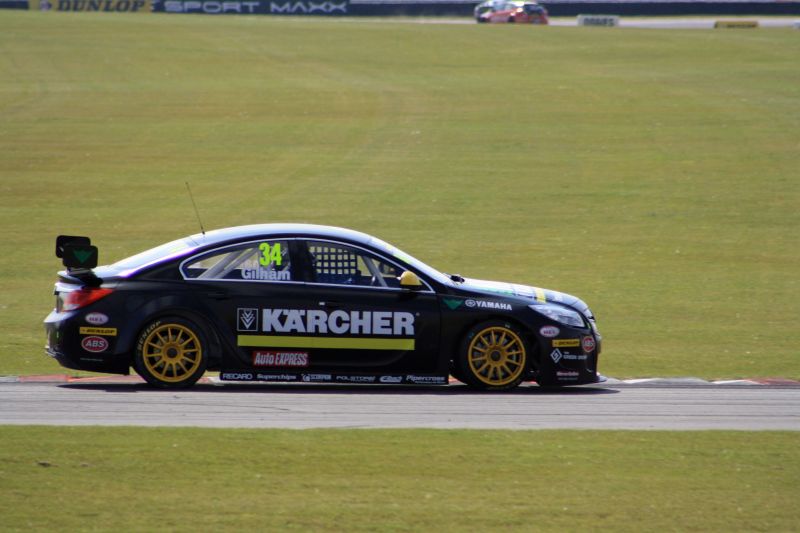 Happy with that. Happy that we showed everyone that the Insignia can run in the top ten, happy that we suffered no mechanical failures (on a day when there were many due to the heat), happy that a driver with zero seat time can immediately put the car into contention and happy that our decision to take time out, develop the car in testing and come back into the BTCC as a contender and not an also ran was proven the right one.

Looking at the end results you might think I’m being delusional; two DNF’s and a 13th place (still a sea change from the first time the car came out) but hardly worth shouting about? However if you look at the detail, Tony only got into the car for the very first time at 7.30am on Saturday, he couldnt reach the pedals, the steering wheel or see over the bonnet but by the end of the weekend we’d get to running in the top 10 chasing down 8th and 9th.

In FP1 we concentrated on just getting seat time, we let Tony get used to the car and get his thoughts which were encouraging, lack of rear end grip mid corner but everything else excellent, exactly what we had expected. I took some personal pride from this, Tony has significantly more fwd experience than I do and my confidence in my own driving had taken a hit from the last time we raced the car so I was doubting if I’d lost the touch in setting up cars. We tested at Brands Hatch last week and ran nearly 3 seconds faster so I was confident we had done the job but sometimes it takes another driver to confirm that, psychological I guess.

Despite the lack of any time in the car Tony’s times were excellent, testiment to his experience as well. Tony immediately had some suggestions on set up to help cure the issue based on his S2000 experience and whilst we were sceptical its important sometimes for drivers to experience the results themselves so we made the changes and went out from FP2. One lap later Tony is back “well that didnt work, car was trying to kill me on the straights”, yep S2000 cars are a different cars to NGTC, on the one hand we wasted a lap on the other though Tony became aware that the usual rule book on car set up can be thrown away with NGTC, inboard push rod suspension on a tin top car is unique and needs a unique set up to make the most out of it. It was an important experience.

After changing back to the original set up we went out again and Tony continued to improve as he got used to the car and then Matt Jackson clattered into him breaking both front and rear sheer plates so it was game over. £500 for two pieces of metal later we were ready for qualifying.

With relatively little seat time in the FP sessions we made only minor changes to the car and Tony set about pushing the car a little harder to see what it could do and a 19th place was pretty reasonable, we still had the rear end issues to deal with but with fresh tyres (there wasn’t the budget for new ones each run) the decision was to run with the amended set up and see how we got on in a crowd, at the time we were gaining an average of a second a lap with each time Tony went out in the car so we were improving at every stage.Race 1 and Tony got a 13th place, we were delighted with that. Before we went out Tony was telling anyone who’d listen that he thought he could get top tens in the car as it was, at the time I was a little more cautious (I had my team owner head on rather than my driver head on I guess) and I was hoping for top 15 results this weekend but for Tony to hustle the car from 19th to 14th on the track was testiment to both his confidence in a brand new car but also the car itself, Tony could immediately drive it and drive it well. Rear end grip was still the issue especially to towards the end of the race but overall we were delighted. Ahead of race 2 we decided to make some more agressive changes to the rear of the car, something we’d planned for testing but thought we might as well try them straight into race conditions so we were looking forward to a big improvement on the car.Race 2 didn’t disappoint, despite a poor start Tony moved the car into 10th place within the first few laps and was lapping faster than the cars up to the top 7, the greater rear end grip had improved his mid corner and exit speed that we were getting to the middle of the speed trap speeds for the cars and he was gaining on the BMW of Nick Foster with each lap, in the back of my mind was something Tony said before he got in the car, ‘all we need is a 7th/8th, reverse grid and pole for last race and we’ve got a podium’ at the time I admired his optimism but now I was thinking he could be right.  But then we got the call over the radio, car was losing power and Tony brought it in, he’d hit Fosters BMW pretty hard which smashed the bumper accross the centre, sadly it mean the ducting for the intake got crushed and covered over the intercooler, no air = no power, damn.

Mood in the garage was mixed, on the one hand the changes we made to the rear end had improved it which showed in the both the lap times and Tony getting the car into the top ten and chasing down the top 7/8 so we were very happy, on the other hand were the ‘what if’ thoughts, the impact on the BMW was enough to shatter the bumper and bend the bumper bar but was still intact, we just got unlucky that the intake flapped over the intercooler rather than stayed where it was, damn unlucky. Tony was right, this is a top ten car and looking for podiums is a reasonable desire now.

Race 3 we were hopeful. With our limited budget the decision was taken to repair the bumper rather than replace it (we did have a spare) so tank tape and zip ties later we were on the grid, Tony got a good start this time and had gained a few places in the opening laps but going into turn 1 he made contact with Dan Welch’s Proton smashing the front corner of the bumper, as it was still weakened from the earlier crash the bumper folded up and hit the floor, race over.

The disapointment and poor luck in race 2 and 3 was hard to take but the team was pretty happy overall, this was a minor feeling of what could be but once we got over that we took great heart in how the car performed and in many respects felt vindicated for the past 4 months hard work in the workshop and in testing. Tony was impressive in jumping into a very alien car and getting it into the top 10 on his second race each time he got out he said ‘what a great car’ and we said ‘what a great drive’ so it was fantastic to work with him both to helping develop the car but also to demonstrate that he was able to immediately show it is a competitive car. Big thanks must go to him and his team who kept us all fed and watered throughout the weekend. Special thanks must go to my TMS guys, the car looked excellent, despite damage in every race it was immaculately prepared and the first car out in the pitlane for every session, all done by a crew of only 4 guys. Considering most teams have 15-20 people at a BTCC race weekend our main techs Ricky (Chief Engineer), Matt (no1), Shane (junior) and Ian (on loan from Team Hard) did a stunning job, thank you guys. Also thanks to Swindon, we’ve had our differences and our plans to do our own mapping got stopped when it was decided that this would not be allowed for next season (making the whole idea pointless) but this weekend they were extremely helpful and have gone a long way to re-build my trust in them, kudos to them for that.

As for the future? Well we dont know, the deal with Tony was for Snetterton only and without him and Karcher supporting us this weekend we wouldnt have even been out for that. Our Karcher partnership is more about our off road racing operation where we are racing Arctic Cat Wildcats in next years Tuareg and Dakar Rally’s but their help in getting the Insignia on the grid was also crucial, albeit a one off for Snetterton. We’ve also lost our truck deal so despite wanting to race at Knockhill we cant even get there at the moment, so next race for us is likely to be Silverstone, we cant afford it but its our local round to the extent that we could even put trade plates on the Insignia and sneak it the couple of miles along the A43 to the track, that would funny.

A final special thanks to the fans, there were a few doubters out there after our disastrous start to the season but your support is instrumental in keeping us going, all we need now is everyone to go an buy a Karcher pressure washer this week and we’re set 😉

See you all at Silverstone, earlier if we can wrangle it.