Weekend began simply enough, park up at Le Mans after a spirited drive down and as we are unloading the camping stuff we spy a row of expensive looking race trucks in the fenced off car park next door. Then as we were heading back to the campsite one truck lowers its rear door and a P1 GTR just rolls off into the car park. Just in case you didnt know the P1 GTR is McLarens latest race car, built from the P1 road car the GTR represents the fastest race car McLaren have built, nearly 1000bhp and it was at Le Mans for its first real public viewing to commemorate McLaren last winning the race in 1995. In other words is this not a car you just ‘see’. 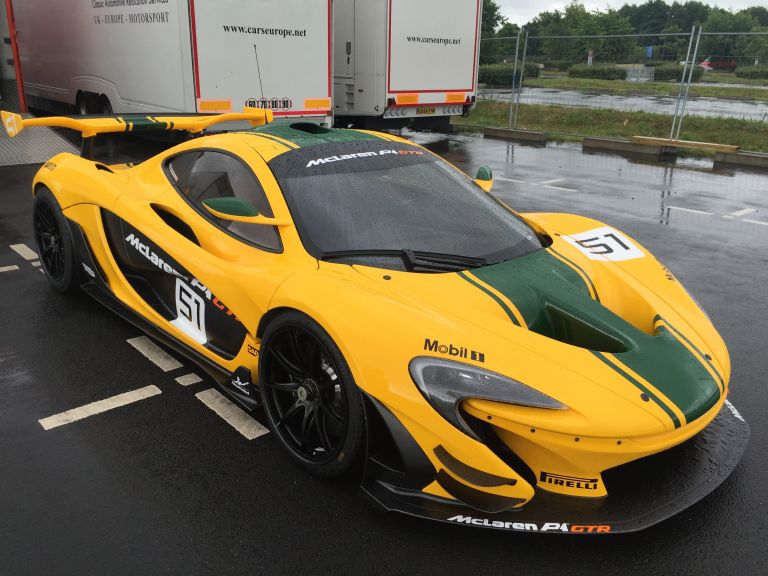 Right off the truck

So, after a brief conversation through the fence (helped no doubt by the fact that we were there in a McLaren ourselves) and John (the race tech with the car) allowed us in to have a look round. What a stunning piece of engineering, more carbon fibre than I’ve ever seen before (and I’ve seen quite a bit over the years) and a presence just sat there in the car park that was just amazing. 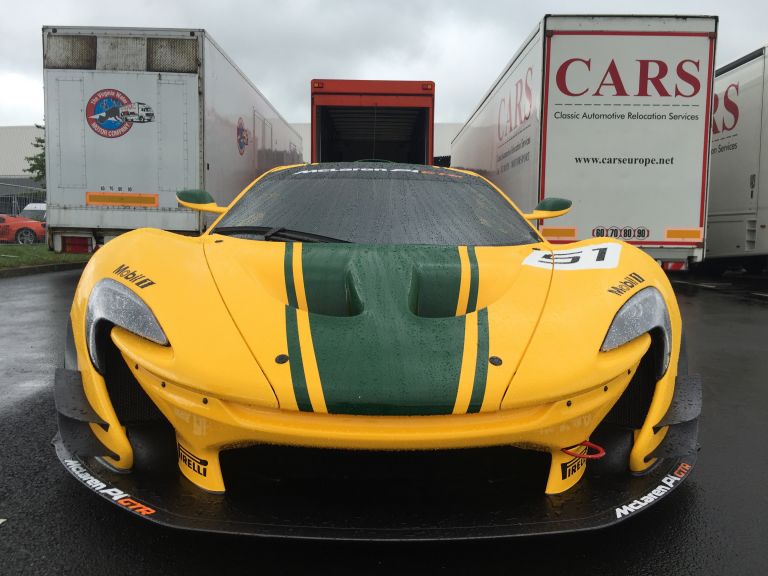 A little later we head back and find the car park is now full of Woking’s finest; 4 P1’s, 5 F1 GTR’s, 4 650S Le Mans and 19 650S models, all up there was nearly $200m of cars! McLaren were there at the race to commemorate their last win in 1995, bringing a collection of owners there were celebrating the 20th anniversary with a jaunt down through France and culminating with a parade lap of the full le Mans track ahead of the 24hr race. 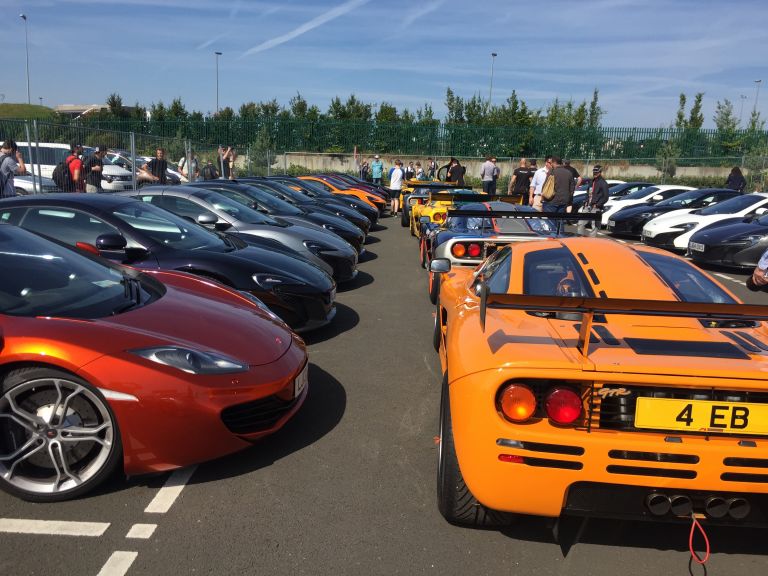 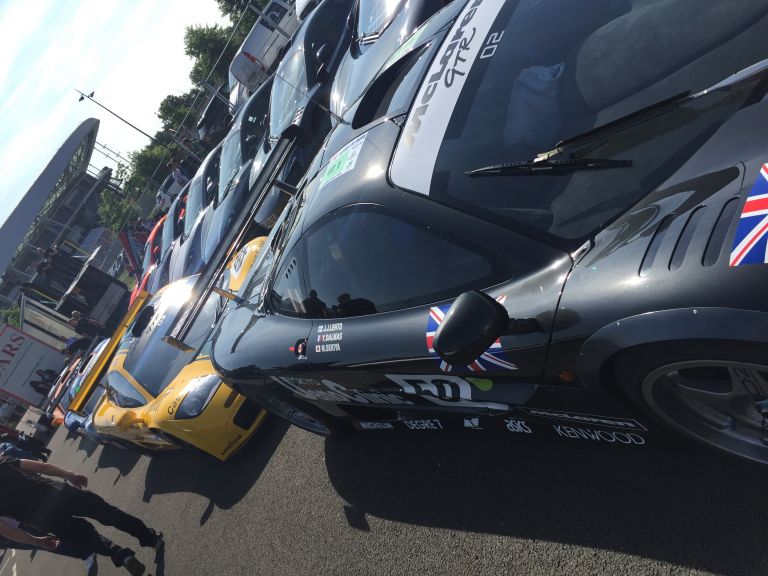 Well, nothing ventured nothing gained in my view so I wondered over to the group and said “No 12c here……..want to borrow mine?” I fully expected to be given a corporate Paddington Bear style glare and be politelytsold to go away, but I got the complete opposite, the McLaren guys made a few phone calls back to base and subject to a few checks they would be delighted to have us along – result, Ethan and I would be able to participate in the track drive! 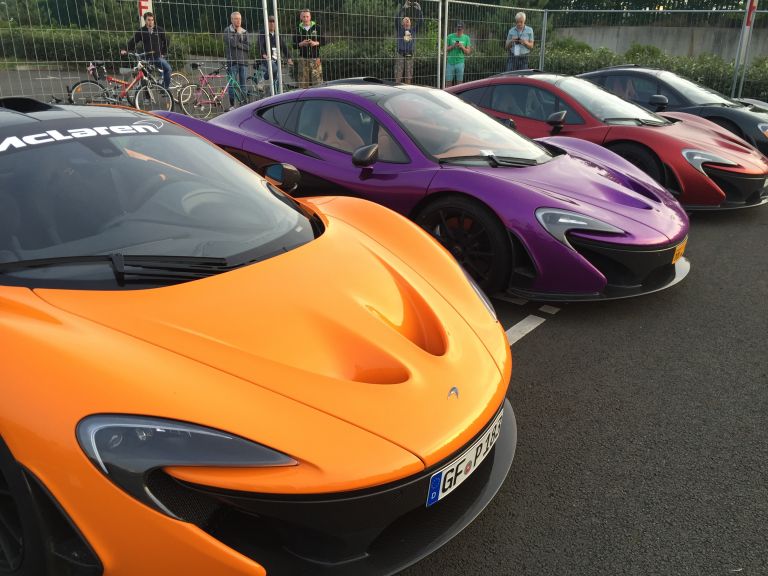 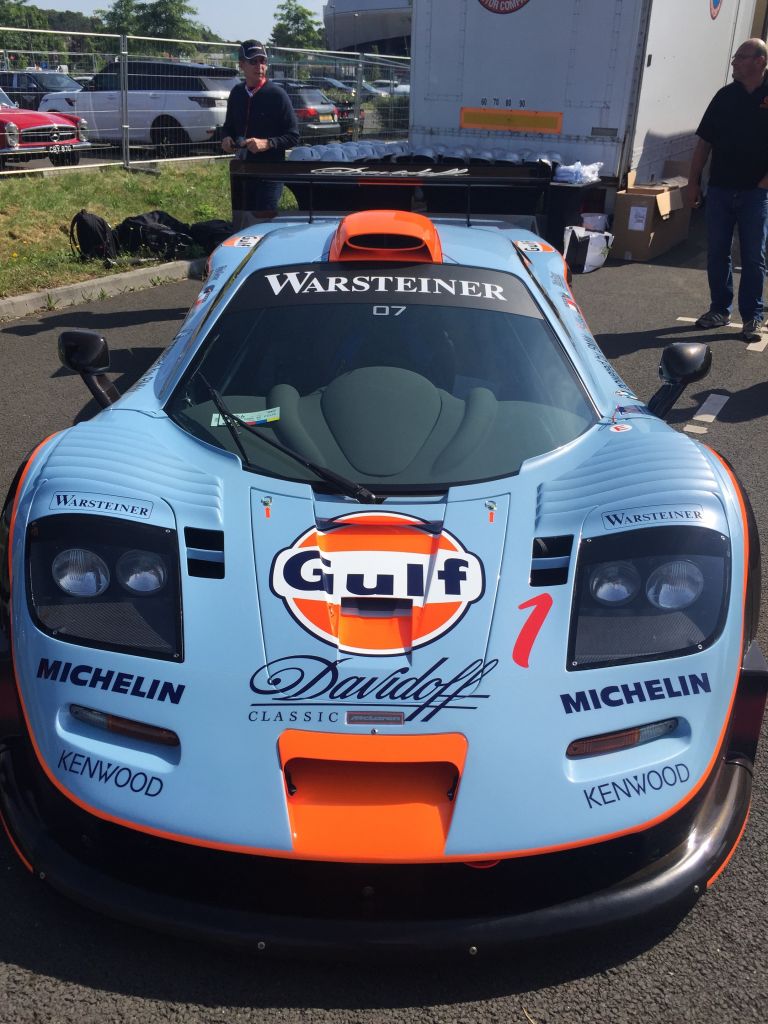 Any race car driver would give anything to drive Le Mans, its a road circuit so its not a track you can just book on a track day – its Le Mans24hr/Classic or never and seeing as I dont have the budget (or experience) to drive in the Le Mans races this was as near as I’d over get to that. The downside was that there was a strict speed limit of 50mph, however I’d been on’parade’ laps before, once you’re out there there is usually nothing ‘parade’ about them so we were over the moon. 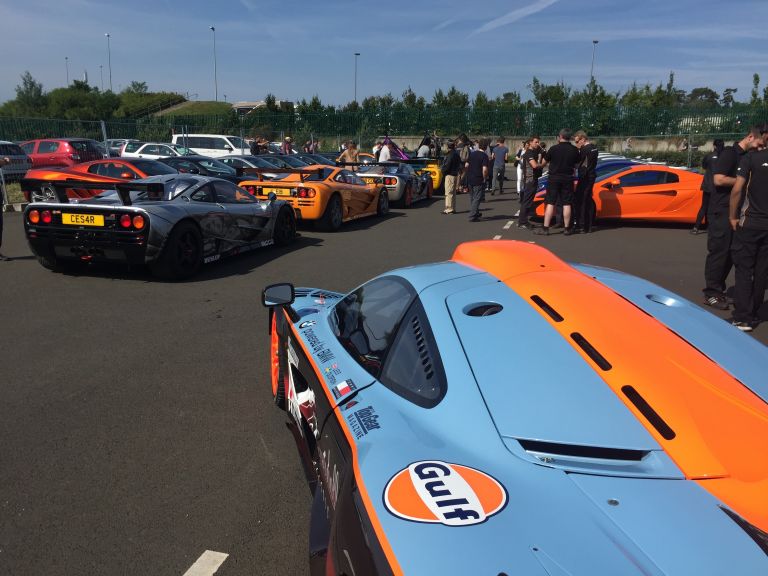 Awesome sight
The group was made up of McLaren owners as well as a few select drivers from the McLaren team over the years including JJ Lehto; one of the winning drivers from 1995 race (where five F1 GTR’s got 1st, 3rd, 4th, 5th and 13th) and us, in our second hand 2013 12c Spider. Understandably (and as it turns out fortunately) we were placed at the back of the group, the P1 GTR led, followed by the 5 F1GTR’s then the 650s and then us, great, we can misbehave back there I thought – there was no way I was driving round Le Mans at 50mph! Well I didnt need to worry, JJ had no intention of cruising the P1 GTR (all 1000bhp of it) round the track at 50mph, he shot off like a bat out of hell quickly followed by the F1 GTR’s and the P1’s – even right at the back we could hear it, and we were off. 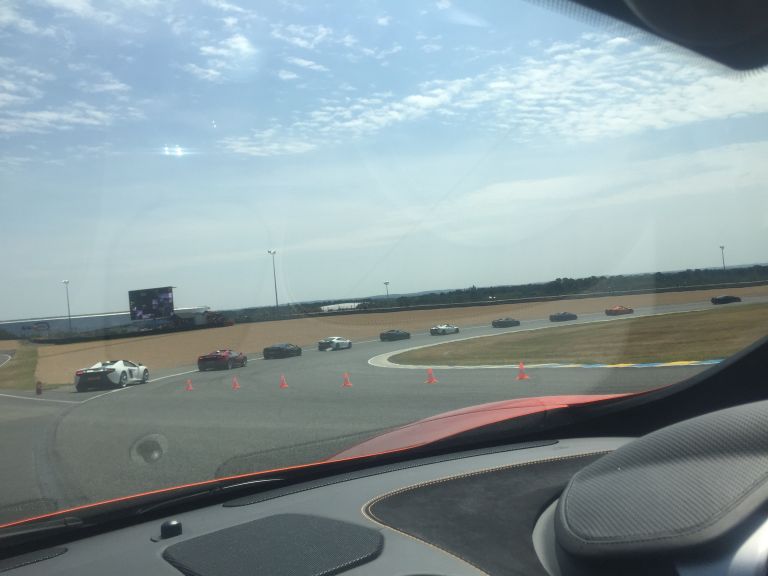 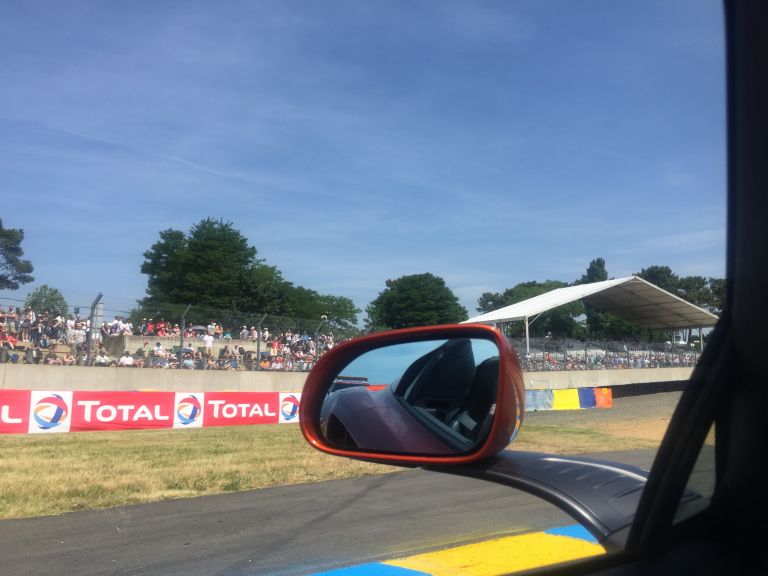 A decent crowd ahead of the race

First few turns were quite delicate, we werent allowed to overtake (that was a very strict rule) and we were behind a white 650S driven by a journalist,well I think he wasnt really aware how quick these cars are so a scary moment of mid corner braking round a tight turn and decided we should hold back and get a better run at everything, downside to this was we were being shadowed by the Audi RS3 course car – damn.Well, I neednt have worried, after a little while of me swerving about trying to make it fun the course car came alongside, I thought I was about to get told off but no, he gestured that we should hold back to let us (both) get a run at the track – cool, got to love the FIA sometimes! 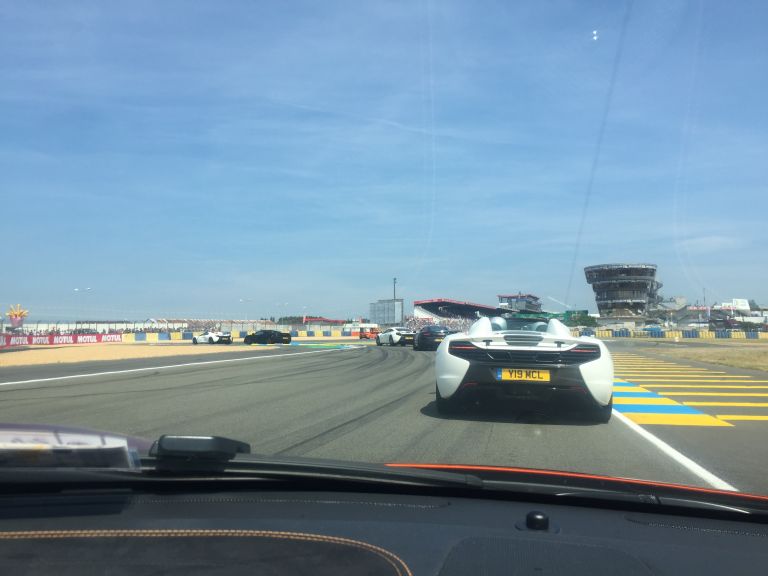 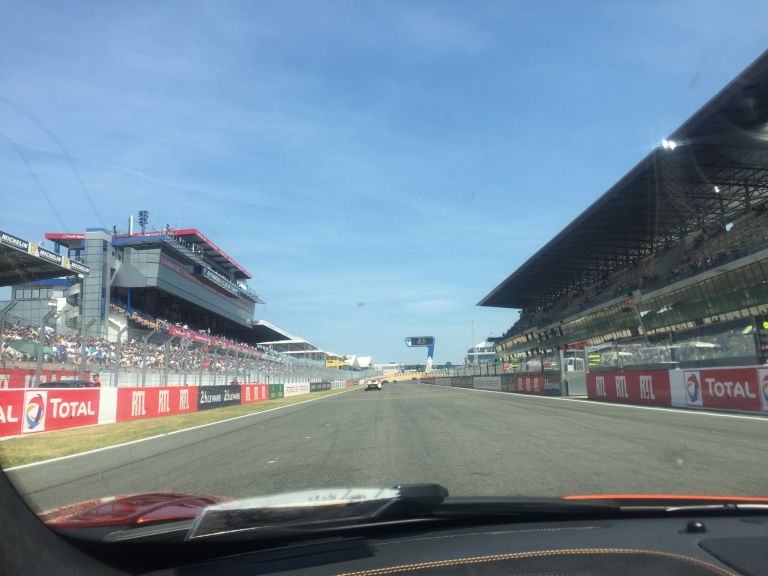 Pit straight – no way was I cruising down here

So after that we hung back and got to power through the turns and really enjoy the track, each time we came up behind the white 650, slammed the brakes on with the Audi catching up and doing the same. Pretty sure he was grinning as much as I was in this and was hilarious to see him pull up each time as we caught up the 650. Down the Mulsanne straight we got up to 240km/h (before the white 650 loomed in to spoil the fun) but the others with the more room they had got higher, the P1’s near300 km/h and the P1 GTR nearer 360km/h – thats quicker than the LMP1 cars! All too soon it was over, the idea was a photo shoot of the P1GTR and F1GTR’s crossing the finish line which meant that we had to wait at the start of the straight at the back of the group, the others all peeled off one by one leaving us on our own with our friends in the Audi course car. Well I wasn tabout to bimble along the finish straight at Le Mans in front of 100,000 people, so we launched it, Audi in hot pursuit with our run ending with a full on aero braked finish to avoid hitting the white 650 again – great, great fun. 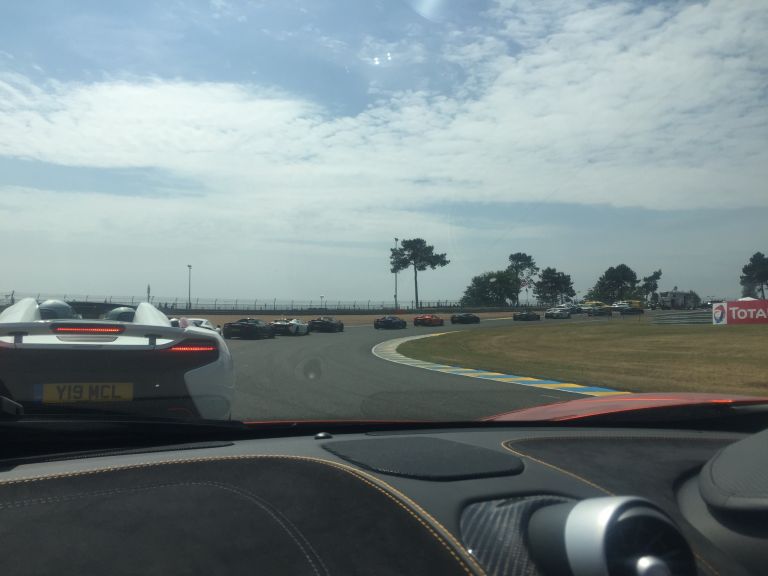 Great, great fun
I’ve got to say huge thanks to McLaren, everyone we met from senior director level to PR staff was nothing short of fantastic, we were small fry in terms of owners there (several were multiple P1 owners) but we were treated like royalty by everyone and all my thoughts that McLaren were a cold organisation were completely dispelled, they really are a family. To give you an example, Ethan was sat on his own at one point (I was engrossed in one of the cars) and seeing he was on his own a pretty senior member of McLaren staff went over and starting talking to him, he had nothing to gain from speaking with Ethan (not like a child is going to buy a car is it!) but he went over there as he saw a guest of Mclaren on his own and looking a bit lost – thats the sort of people they were.

After that we got to spend the rest of the weekend in the McLaren hospitality suite, got to meet some great people including JJ and Gordon Murray(the designer of the F1 GTR) who even signed the underside of the bonnet on our car. Was something very surreal about drinking champagn in an air conditioned suite over the pitlane then walking back to our crappy little tent!

The drive back home seemed an anti-climax after all that, we had some fun getting stopped by the police (25 van loads of CRS at a service station – McLaren does that it seems) and then home. 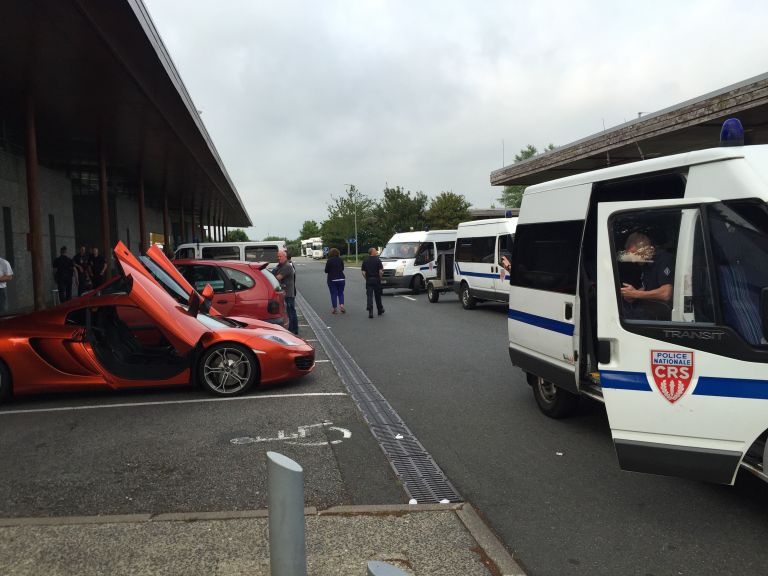 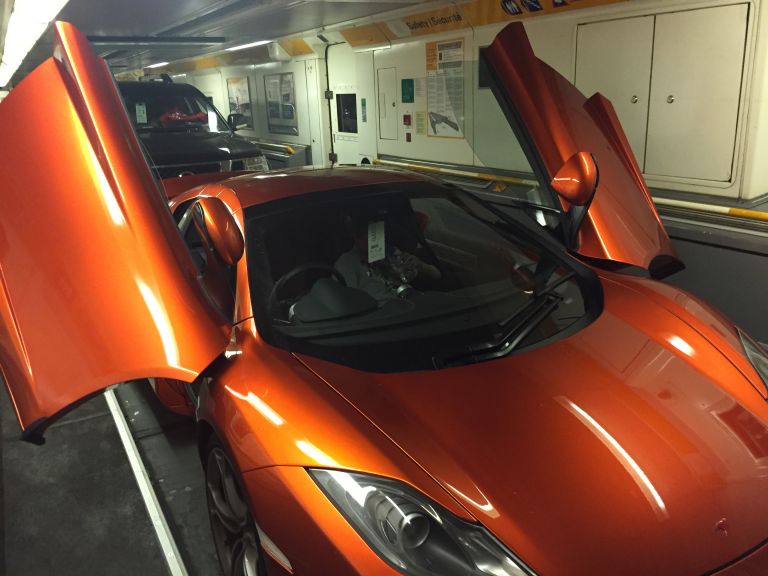