Its not been a bad development for the E92 M3, over the last9 months we’ve upgraded the suspension, wheels, brakes, exhaust and powernicely so overall we’re pretty pleased with the development thus far. Therehave been some notable highs, such as a spirited drive from Cornwall to MiltonKeynes in the early hours which demonstrated the Moton suspension and AP brakesto their finest as well as countless times where the roar of the Akrapovicexhaust simply made us smile just for being in the car. Hearing the Safety CarDrivers of the CSL Cup describe the car as the ‘best safety car they’ve everdriven’ was nice as well as well as comments from owners saying that at lastthey thought the car looked good also stand out. There have been some lows too,the satnav will not be missed, neither will the stupid seat belt helpers or theclutch switch which ensured you failed to start the car at least once a weekcan happily be consigned to the parts bin. We’ve been impressed with thequality, unimpressed by the standard cars ability on track (10 seconds slowerthan a Cup car is just woeful even allowing for tyres) but overall we’ve grownto love the E92 M3, warts and all, it’s no CSL but its a better overall carand thats not to be sniffed at.

But the time has come for the car to continue itstransformation into a full blown CSL Cup race car. People often ask what thedifference between a road car and a race car so the idea now over the next fewmonths is to explain exactly what we do when we create a race car, so thismonth we’re going to start with the most painful process in any race cardevelopment (other than smashing it into a wall at 60mph like its sister) – thestrip. 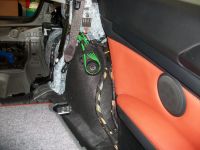 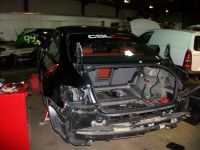 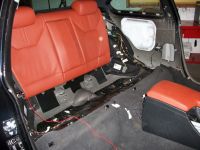 Most race cars start life as road cars, even manufacturersstart with a standard shell (albeit without all the crap that goes i it) butusually race teams start with a written off car or bare parts, not us, we takea perfectly good, 2006 M3 and gut the thing – we must be mad! 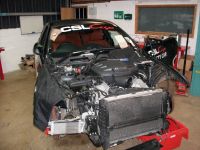 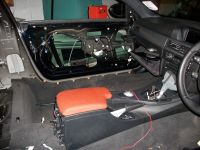 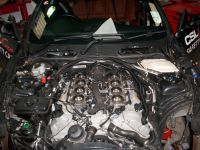 First order of business (other than cashing in the tax diskand making sure its not full of fuel) is to de-program the cars canbus modules. The E92 is a complicated pieceof kit with nearly 30 separate modules (think control ECU’s and you’d be halfright) dotted around the car controlling everything from your windows to thecars fueling system. Simply hacking them out will leave you with a car thatwont go (as Top Gear found out when we sorted their 24 hour race car for them) soyou have to systematically deprogram each one off the system, once thats donethe battery comes out so no harm can be done to the rest of the cars electrics. 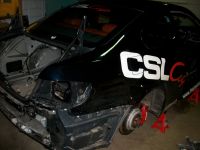 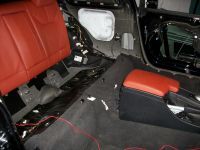 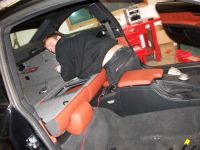 After this the real fun begins, seats, trim, dash, carpetand all the interior tend to be first eventually leaving the car bare insideexcept for glue residue and the wiring harness. The harness itself is thenmarked up with each connector and wire and this removed usually via the dash.Then some poor sod has the really awful job of clearing out the last glueresidue with brake cleaner which is time consuming (can take a whole day just todo this) but its important as the interior will be painted after the cage goesin and glue does not make for a good surface to paint on. 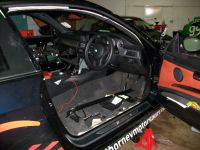 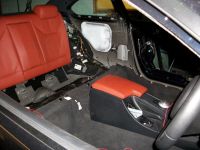 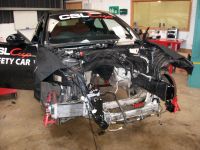 After this the cars bodywork is removed, front and rearbumpers are sent away for moulding to create carbon fibre race and road itemsthe bonnet and boot are removed for single skin race versions and usually thedoors are sent away for the same reason save for now as we need them to launchthe car at Autosport next month so they will have to wait. Wheels, brakes,suspension are all removed for good measure. 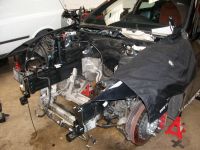 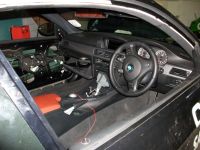 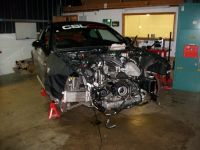 After the front bodywork is off you can marvel at thecomplexity the E92 M3 is when compared to its older brother – there are 5radiators (oil, water, power steering, gearbox and aircon)  all of which need to be removed to getaccess to the engine.

After all this we then remove the engine harness, engine andgearbox to leave the chassis with its bolt on furniture. Uts about now we canget a good look at what we need to do as regards cage and initial race set up.

Overall the E92 really is a development of the E46, theoverall chassis design is remarkable similar and is a true single design withthe chassis being able to run in left hand or right hand drive form. The carsbraking systems are all situate in the same place as well as the dash, mainshell all looking pretty familiar – they are different for sure but you see can how its a development ofthe E46 not a radical change. The other thing that grabs you is just how big thecar is from the inside, stripped of its trim the cabin seems huge compared tothe E46.

The net result of all this work (4 full days labour for twotechs) is the chassis ready for the cage to be installed and a great big pileof parts for ebay to sell. Anyone want to buy an E92 M3 interior?

Next month we’ll do the cage.