The original R888 tyre from Toyo was well known to us, we first starting using the tyre on the Vauxhall VX220 cars and subsequently we raced on the R888 in BMW's and Vauxhalls and it was the preferred tyre for all of our track Vauxhall and BMW models for many years so when it phased out some time ago we were a bit disappointed.

Fortunately the R888 has now been superceded by the new R888R and is pretty different to the outgoing model. As well as compound changes and a stiffer sidewall the tread design has been changed to add a centre line partly as part of EU regulations requiring such a feature for water dispersement.

We've been using the tyre for the past season on the E30 BMW race cars and have been pretty happy with their performance so when we were looking for a tyre for the Mclaren 12C we figured it was worth a go.

All Mclaren models run a 305/35/20 rear and a 245/35/19 front which created the first question, the R888R doesn't come in a 305 size so we decided to try the 315 section instead which we mated to the standard front size - 245/35/19. Now generally you would assume that widening out the rear track would cause more understeer and the 12c on standard geometry settings tends to understear anyway, however since we fitted the 12mm spacers to our own 12c (widening the track out to a little wider than the 675LT) we've had no understeer issues at all so we decided to try the tyres on a stock Mclaren geometry set up but with our spacers. We will run the car without the spacers but for this test we wanted the optimum. 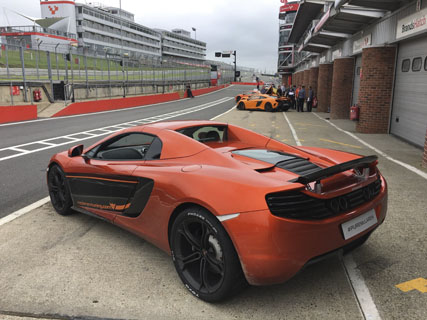 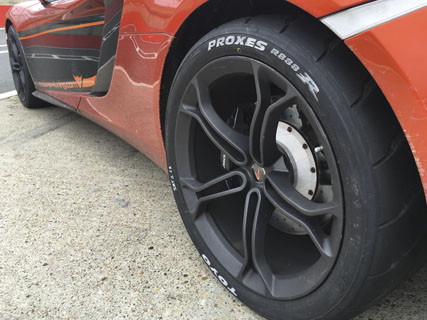 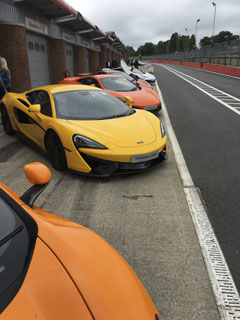 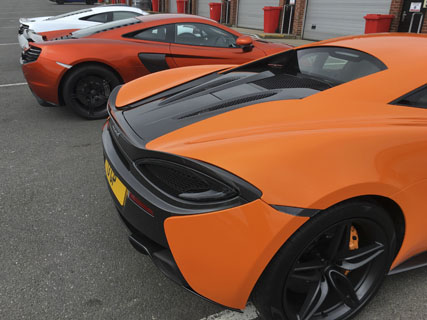 Well despite the sizes of the tyres (profile) being the same as standard for some reason the tyres look huge in the arches, almost Nascar look which we (and everyone else who saw them) loved, it certainly gives the car a more menacing look even without the Toyo logos painted in. Most of this is down to the more rounded sidewall of the Toyo when compared to the Pirelli tyres more usually found on the Mclarens and personally we though the look was great. The rears being 315 section make the rear of the car a lot more aggressive and following on behind the view is very purposeful.

Most importantly there was no issue of contact on the car at all, a good 18mm all round and no contact on the arches at the rear, even with the 12mm spacers, fit was perfect.

For the track test we decided it would be fun to attend another Pure Mclaren event, Pure Mclaren is the Mclaren Automotives dedicated operation for owners and wannabe owners to try out the product and drive your own car either on track or at other events. 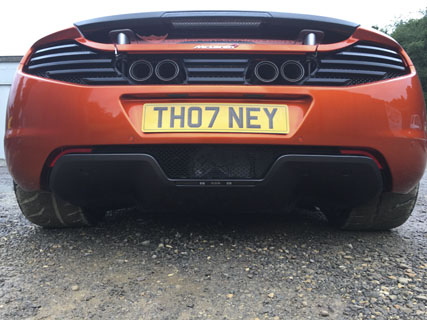 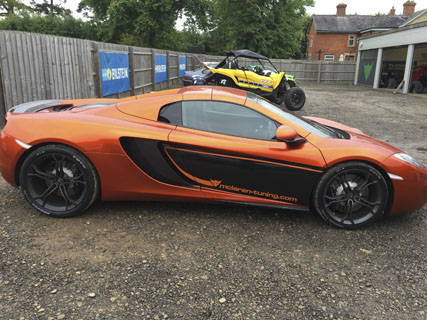 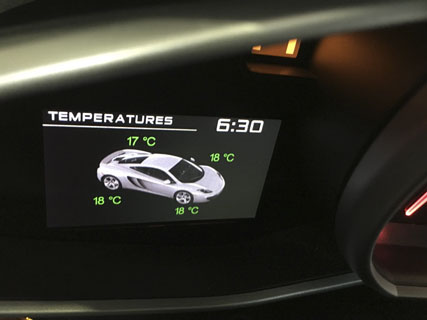 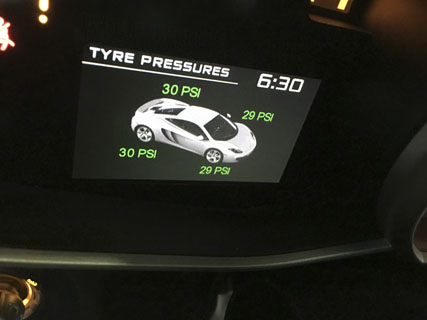 To call a Pure Mclaren Day a company track day would not do it service, as well as a few owners taking their cars out on track there are also driver training programs, superb hospitality and a dedicated band of Mclaren technicians to attend to your car, they really are the best track days you can have.

To reflect the quality of the day Mclaren Automotive's CEO; Mike Flewitt, has attended all of the days I've been to and his good lady wife even pilots one of the 650 Sprint cars round the track at a mean old pace - thats like Sergio Marchionne or Oliver Blume coming to a Ferrari or Porsche day - not overly likely.

It was nice to have the Mclaren techs poor over the car, not only to make sure its all ok for track but also to hear their views on what we'd done. One said 'blimey, you've done a lot of work to that' coupled with their amazement that our sports exhaust sounded awesome but also didnt trip the noise meters at Brands Hatch, praise from God indeed.

Anyway, enough of how good a Pure Mclaren day is, what about the tyres? Well the benchmark of course is the Pirelli P Zero road tyre the Mclarens usually come with but also the track special Trofeo which is the best choice for track but suffers from high tyre wear and is relatively poor in very wet conditions. As you'd expect from a track tyre the R888R very quickly ecliped the P Zero in terms of lateral grip and feel, that was a given really however I'm actually a big fan of the P Zero on the Mclaren as until it overheats (a couple of laps usually) it is very predictable and is one of the better all round tyres you can get.

The R888R was clearly in a different league in terms of grip under braking and lateral grip to the extent that a couple of times I caught myself out on parts of the GP track I wasnt as familiar with as I remember, on P Zeros my braking would have been early enough to know, on the R888R's it wasnt so after deciding to calm down a bit (reminding myself I was testing and not there to enjoy myself - ha) we got to looking at the data.

Toyo suggested running 32 psi hot as the optimum with a maxim of 100 degrees on temperature but after two cycles we figured that was too high so progressively got the pressures down to 29 psi hot and 90 degrees maximum temperature and it certainly helped having a crew of Mclaren techs there as it meant I could come in, do a quick pressure check and head out again without issues on cool down laps killing the data - thanks for that guys. It was also helped by the fact that the Mclaren had both tyre pressure and tyre temperature data available as a display on the dash, I knew the 675 and the 650 had this but I assumed my lowly 2013 12c didnt - wrong, even my pauper spec car has it so that was a tremendous help and is really useful for anyone tracking their Mclaren.

At the end of the day I'd run 9 heat cycles through tyres and couldnt detect any degradation of performance at all. Wear was even and uniform what little block tearing their was both sides which suggested under braking rather than a geometry issue. With harder use I'd say the R888R would be good for many days (of course depending on the track and weather). In an ideal World of course we'd have a set of Trofeos there as well and back to back them but hey, I have to pay for these tyres so I have to be sensible!

Best news of course was that the wider tyre at the back gave no issues whatsover, no rubbing and it meant that getting the power down from the tighter turns (only really one at Brands) was more fun, you could feel it start to lose traction but that point was a lot higher than you expected and importantly didnt degrade as the tyre got hot, the wider rubber meant they resisted heat build up really well.

Initially this went badly, I stupidly decided to set the pressures as per the manual for the standard tyre and pretty quickly learnt that these were far too high, the car felt skittish and wondered at speed. Several stops dropping tyre pressures down 2psi at a time meant we got to a cold set up of 29PSI, some 5-6psi lower than the stock tyres. At this level the tyres warmed up quickly (sometimes an issue on track tyres used on the road) but suffered no extra wear. Grip when cold was good, lateral grip remained high as you'd expect and the only real downside was the extra tram lining we got but it wasnt awful, just a bit more pointy. The real nice surpise was the extra noise or rather lack of it. Spend some time on a car shod with Trofeos and you soon know about it, they hum pretty much at any speed, some like it, for some it gives you a headache and I was expecting the same with the R888R as the R888 before it made a racket that would wake the dead. However the R888R was actually no more noisy than the P Zero, no joke, in fact theres a section on the M25 where the P Zero used to drum like a demented Stomp cast member but the Toyo was near silent, that was a nice surprise.

Despite in raining here every 30 seconds as yet I've not had time to drive the car in the wet so this really isnt a complete test for now, I've no doubt the R888R will be 'interesting' in standing water but the extra central line will I hope mean that it is 'interesting' rather than 'lethal' as the old 888 was.

You cant really make a difinitive conclusion from one day on one tyre of course, the best way is multiple tracks and back to back tyre tests but as a simple test to see if the larger tyre worked and if the new R888R from Toyo could be seen as a viable alternative to the Trofeo the answer is a resounding yes. It used to be that Toyo was seen as the cheaper alternative but I think the R888R can now stand up as a decent alternative without regard to cost, and of course the 315 tyre on the back does look awesome 🙂